If you haven’t been down to see us at our new location in Ocean Beach, you need to stop by! We are on the corner of Newport and Cable Street, and this coming week we’re going to be hosting our first fundraiser!

California Wild Ales has teamed up with the Leukemia Lymphoma Society to host its second fundraiser for the association. The fundraiser will occur at our new location in Ocean Beach, in honor of the co-owner Zack Brager’s mother, Rebecca Jungreis-Brager, on Tuesday, June 15th, at 5:00 p.m. at 4896 Newport Ave., Ocean Beach.

This cause has a very personal connection for Zack because he lost his mother to this horrific disease on July 15th, 1999. Additionally, the fundraiser will support Derek Dawson on his quest to become Leukemia Lymphoma Society’s Man or Woman of the Year.

As part of this event, the brewery has created a new beer named after Zack’s mother, Rebecca Jungreis-Brager, called RJB. The beer is a unique blend of golden sour ale with blueberries from the Carlsbad Flower Fields and Cabernet Franc grapes from Summer’s Vineyard in Escondido. It’s special to the brewery because it’s the first time it has made a sour ale using Brettanomyces at bottling.

The process requires the ale to sit a little longer in the bottle, resulting in an added layer of funk to the finished product. Finally, after resting in the bottle for approximately five months, the beer is ready to be shared. This method also allows it to age beautifully for years to come. The finished product has a soft and bright tannic character and a tropical funkiness from the late dose of the Brettanomyces yeast.

The first fundraiser at our Sorrento Valley location was a huge success. We couldn’t be more excited to hold the same event at our new Ocean Beach location and invite the community to come together to support a truly worthy cause and try some great beer.

All Donations will Benefit LLS

California Wild Ales will donate all tips from the evening to the Leukemia Lymphoma Society, along with 15% of the bottle proceeds. In addition, people can make a direct donation at: https://pages.lls.org/mwoy/sd/sd21/zbrager.

This event will be OB’s first significant fundraising effort – the first of many to come – and we are happy to have a platform like this to give back.

Join us for some beers to help support this specail cause! 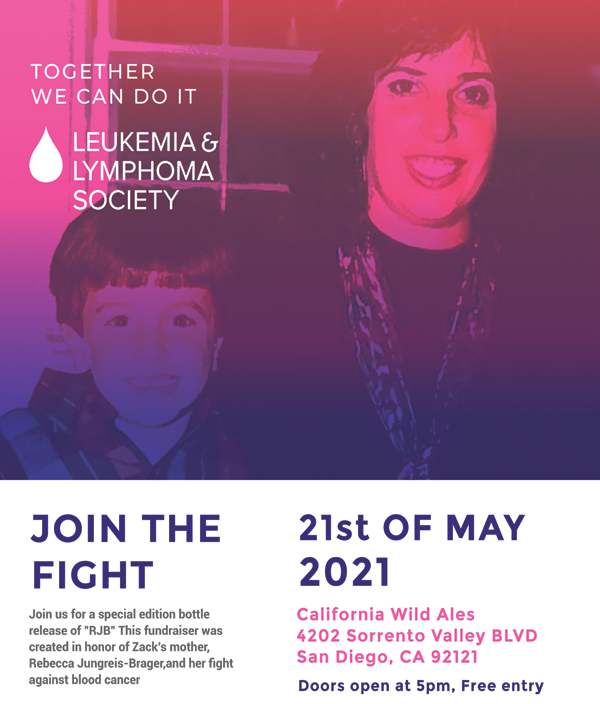 Join us Friday and help us raise money for this wonderful cause.